Performances begin next week for the 2017 revival of Robert Patrick‘s Kennedy’s Children, presented by Regeneration Theatre for 6 performances only in an environmental production at UNDER St Mark’s in the East Village.

Check out photos from the show below!

“The people are hungry and tired and weak and disillusioned, but isn’t that a sure sign that something’s crumbling?” – Rona, Kennedy’s Children

November 22, 1963. The day optimism died for a generation. November 8, 2016. Is history repeating itself? Do we ever learn from the lessons of the past. Are we destined to grow up like those who were left behind in Dallas – Kennedy’s Children…

This rarely seen, rich, evocative, and very perceptive play proves to be as relevant in 2017 as it was in 1974, and full of lessons that we should be playing close attention to in the current political climate.

Tickets are $18 and available at http://regeneration.bpt.me. 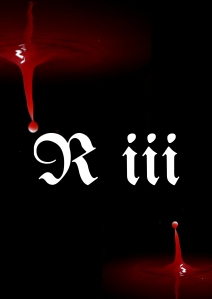 The story of a tyrant….quintessential Shakespeare in a non-descript time.
Directed by the renowned James Jennings and starring Thomas Leverton.*

The Improvisational Repertory Theatre Ensemble invites you to join an improvised game show… AVOIDANCE! From an original Concept by Jamie Maloney, directed by Marc Adam Smith, with technical direction by Anne Carlton.

LOOK AT THE BROADWAYWORLD PHOTO-FLASH

So how’s life?? What would you do to get away from the trains… the bills… the boss… Well, in IRTE’s improvised “game show,” contestants face the ultimate challenge… EVERYDAY LIFE! Can they beat the stress of the daily grind? Can you? Each eager contestant is vying for the grand prize: Getting away from it all!

Featured in the company are Getchie Argetsinger, Robert Baumgardner, William Berg, Nannette Deasy,Curt Dixon, Mike Hauschild, and Jamie Maloney. And in the tradition of Saturday Night Live, IRTE also features a different musical guest at each performance, and the renowned Tym Moss fills that slot for these performances.

IRTE is an award-winning ensemble of comedy actors and writers, who develop, produce and perform a season of original themed improvisational shows, following the basic model of traditional repertory theatre. Interested in learning more about improv? IRTE sponsors special workshops like these:

Audiences have said this about IRTE’s last production, “The Experiment:”

“Amazing show! Loved every second!” Johnny Zito; “IRTE’s latest show The Experiment was great fun.” Linda San Lucas; “Great show!” Salem Poindexter; “Sooo funny!” Nora G.; “This is awesome!” Jacquelyn; “Traffic crunches today, but I made it to this crazy good play!” Carol (I bet Carol would be a contestant on AVOIDANCE)

Due to the improvisational nature of the shows, there may be adult content. Parental discretion is advised. Theater is not wheelchair accessible. Entrance into theater is up a flight of stairs. 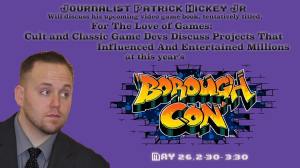 Read about it in BroadwayWorld

Book contains over 60 interviews with some of the greatest minds in the video game industry, interviewed by Award-Winning journalist and former NBC Editor and Examiner National Video Games scribe Patrick Hickey Jr.

Who wrote “Romeo & Juliet? Who first sang “Thriller”? Who played Captain America in the last Avengers flick? All of these questions are basic pop culture knowledge that everyone, regardless of their geekdom, knows. But who are the minds behind some of the most influential video games of all-time? Don’t know, right? Don’t use Google, either!

But here’s the bigger question: Why aren’t their names enshrined in our memories, too? Why aren’t these men and women’s names just as synonymous in pop culture lore as those in music, film and literature?

“For The Love of Games: Cult and Classic Game Developers Discuss Projects That Influenced And Entertained Millions” is the first video game book of its kind to get access to some of the most iconic and unique video game developers from the past 40 years, from the Atari 2600 to the PlayStation 4 and even failed consoles the likes of the Ouya and NEMO.

Didn’t know those consoles existed? It’s just another reason to read this behind the scenes look at the industry, which also features all-new exclusive interviews with everyone from Yars’ Revenge creator Howard Scott Warshaw to NBA Jam mastermind Mark Turmell and Mortal Combat co-creator John Tobias.

Written by award-winning journalist and educator Patrick Hickey Jr., the book contains profiles of 36 of the coolest video games ever created.

“We know so much about video games, but we know so little about the amazing people that made them,” Hickey said. “That was the main reason I decided to write this book. Imagine 36 episodes of VH1’s Behind the Music. That’s what this book is- an unaltered, behind-the-scenes look at some of the coolest, infamous and unique games ever made.”

Seeing a problem that desperately needed to fixed, Hickey reached out to some of the most iconic video game developers David Crane (Pitfall), Garry Kitchen (Donkey Kong) and Rob Fulop (Night Trap, Missile Command) and many more- the end result was a passion project that would finally give the greatest minds in video games their due.

“We all carry such fond nostalgia for the things that delighted us in our younger years,” Fulop said. “This lack of portability to the future is not true with the written work, with a song, a television show, or a movie. One can read Tom Sawyer as a kid, and your kid can read the exact same book. Or see the Wizard of Oz, my daughter is just as frightened by the Wicked Witch of the West as I was 50 years ago. I Love Lucy is just as funny as when my parents enjoyed it 50 plus years ago. And my daughter can still enjoy all of these things in their original form.  Yet she can’t play Dogz. At least not without a serious amount of effort on my part. And that’s just sort of sad, the fact that interactive entertainment is linked to a specific technology, which is always obsoleting itself, remains an often overlooked black mark in the development of the entire genre of interactive games.”

However, while classic developers have their say in the book, developers from the modern era were thrilled to be a part of the project as well.

“It’s great to be part of a book that taps into such a varied history of gaming. Some of these games have been a direct influence on me and can be used to map my years growing up in life.” -Mike Skupa, Developer Bully, Sleeping Dogs

For More on the Book, Head to McFarlandBooks.com, or follow the author on his social media accounts:

Over the past 12 years, award-winning editor and writer Patrick Hickey Jr. has interviewed some of the biggest names in sports, including David Wright, Martin Brodeur and Zach Parise, Negro League Legend Buck O’Neil and MLB Hall of Famers Jim Palmer and Mike Schmidt.

He has also proven himself as a music journalist, racking up interviews with Guns and Roses Drummer Steven Adler, Pantera’s Rex Brown and Creed’s Mark Tremonti.

Hickey was also the Editor-In-Chief of two College Newspapers before he received his BA in Journalism from Brooklyn College. He has had his work published in The New York Daily News, The New York Times, Complex, The Hockey Writers, Yahoo!, Broadway World, Examiner, Bay Currents Newspaper, where he served as the paper’s Sports Editor, the Brooklyn Papers, the Wave of Long Island, Brooklyn Free Press, Blasting News, Tri-Games.net, The Lo-Down, the Brooklyn View, NYSportsday.com, NYSportScene Magazine, ProHockeyNews.com,GothamBaseball.com, The Syracuse Post-Standard, BBallCentral.com, PlayLikeAGirlSports.com,NYCityWatch.org, Scout.com and the official sites of the Brooklyn Aces and New York Islanders.

Hickey is currently a full-time Lecturer of English and Assistant Director of the Journalism program at Kingsborough Community College and is the founder and Editor-In-Chief of ReviewFix.com and the New York Islanders correspondent for TheHockeyWriters.com.

About McFarland & Company:
As a leading independent publisher of academic and nonfiction books, meeting high library standards has always been a major focus, and many McFarland books have received awards from the library-oriented (Choice Outstanding Academic Title and ALA Outstanding Reference Work) to the specialized (Hugo, Edgar, Stoker, USCF Chess Book of the Year).  McFarland is recognized for noteworthy books about pop culture, sports, military, transportation, body & mind, literature, history and medieval studies, among other topics.  We’re located in a beautiful Appalachian mountain town (Jefferson, North Carolina), where we offer about 6000 books in print, offer about 4000 ebooks through online booksellers, operate our own printing facility, and employ 55 people.
—————————————————————————————— 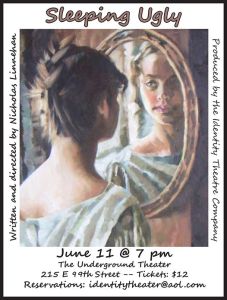 Nicholas Linnehan has reworked a age-old fairy tale to suit our modern world.

The character formerly known as Sleeping Beauty wakes up in a world where warts are in fashion … and she has them. While she’s en vogue, she can’t wrap her brain around this drastic change, nor can anyone around her. “Sleeping Ugly,” as she has renamed herself, flees her village and bumps into the Ugly Duckling, who, like Sleeping Beauty/Ugly, is the subject of bullying for his appearance. The two become fast friends.

Meanwhile, the Ogress Queen, here called Malificent, is still obsessed with being the fairest of them all. She believes that Sleeping Ugly’s new fashionable warts hold the key to her problem. She strikes a deal with Sleeping Ugly to take her warts. As part of the deal the Ugly Duckling will get to become a beautiful swan. Malificent casts a spell and each character gets exactly what they want, or do they? They’ve all gotten what they want but will they live happily ever after? Sleeping Ugly examines the concepts of beauty and body image and social presences regarding them.

Identity Theater Company is a group of differently-abled artists devoted to exploring and challenging issues of the human condition. ITC strives to present works that cultivate understanding, promote tolerance, and engage its participants in meaningful discussions. 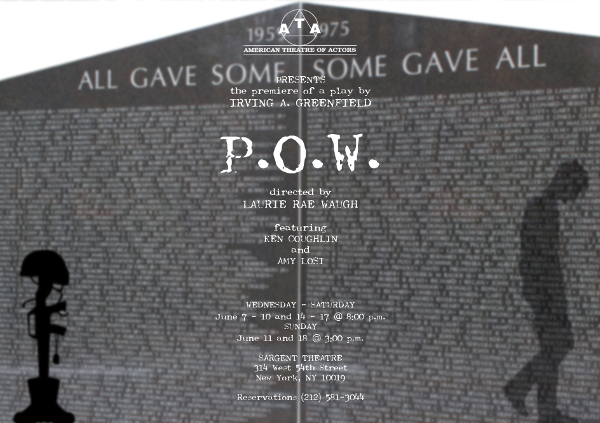 Ms. Waugh has become synonymous with tackling intimate dramas with sensitive subjects. In this drama, a college professor and former Vietnam Vet reads a short story to his class that alarms the Dean of the Department; enough so to facilitate his arrest and subsequent trial – for his life. Our country’s morals are on trial with this distinguished academic.